Why did the wall come tumbling down?

I'm going to tell you!! First and foremost this is not a wall Rockin Walls built. I'm sad to say this is an example of improper walling. I loved driving past this wall and think man thats a lot of wall. I also figured it was a mortared wall. I was wrong about a lot.

From a quick glance this 4.5' H x 300' L + PA Blue stone Retaining wall looks like a beautiful wall. What you can't see could cost you. I've had a few bids were the clients told me the other guys included aggregate behind the wall. ( to me this is just another line item which cost the client labor and materials.)

A proper built dry laid stone wall is not built with aggregate UNLESS you have drainage issues, or engineer has spec'd it. Other wise a traditional dry laid stone construction does not include aggregate only soil.

The property owner said when the wall was being built every week there was a lot of turn over of the work crew. As a waller this is not a good thing. A professional wallers have their own walling style which is like a signature. You can see this in the photos below.

The other notable issue with this wall is the fact that not one tie stone is placed in the wall. On at least a 3 ft high wall tie stones should be placed halfway up and set on center every 36". As seen on my wall drawling on the Stone Examples page.

MC Through Stones Summer 07 (Tie stone article on how to)

This wall was built with cement cap stones. Interesting choice one which I'm sure helped keep pricing along with speed for a the crew. The cement cap stones look like someone slapped mortar to keep the caps on the wall. Blow up any photo you decide. I like to use natural stone as much as possible. With this wall due to the weight of the cement caps I would have placed them dry laid. Mortaring the cap might be advised if small children or adults planned to walk or run on the top. But the owner said this was not the case. Which in this situation could have been set with out mortar.


The building of this wall was only stone on the face which keeps cost down. Looks good at first glance and will come tumbling down. There is no true structural support to the back of the wall.  Aggregate alone is not a solution for build the back side of a RETAINING WALL.

This is a wall I worked back in 2010 which was built for Baltimore City. Located across from the Museum of Art in Charles Village. Wyman Park Dell. As seen the double sided stone construction ie two walls built with small pack stones in the middle. This wall is 27" high before cap stones.


This is a public park. Please take some time and visit the wall for yourself. Google Map


When I looked down at this pile of small little white stones. I wondered where did all the PA Blue stone go? Its lost in a see of aggregate. I also ask my self did the contractor who took this job on - have any idea of what he was doing? No he didn't - if he did it wouldn't look like this. Nor would I be telling you this sad story of how the owner has to pay someone else to fix what shouldn't have failed.


Zach Goebelt from www.OutDoorInstallation.com - explains in this YouTube Video why you don't use just aggregate on the back of a wall.


In this photo you can see how the more of the wall is about to blow out. With the bulge in the middle. Just matter of time!

The property owner told me he felt that mowing so close to the top of the wall over the years might have caused some of this. I had to tell him that was not the case. Any proper built wall shouldn't do this. I would understand if it was built correctly and there was a great deal of heavy water flow over years and years maybe. But not in the case. Just another example of clearly an uneducated leader of a work crew who did not lead his team to a pure victory of a successful standing wall.

Projects like this give home owners the impression that "dry stack walls"  may not be as strong structurally as other alternatives. Not true at all.

I hope the next guy he hires has a clue about repairing a dry laid stone retaining wall. I didn't have the heart to ask what he spent the first time. I look forward to driving by again one day to see this wall back off the ground. Standing tall and strong. Fingers crossed.

Be wise - be smart - educate your self. Hire a true craftsman who takes pride in his/her trade. Who has spent the time to be trained and educated by others a like.

CLICK HERE TO READ: STONEWORK - A technical guide to standards and identifications of common faults in dry stone walling. 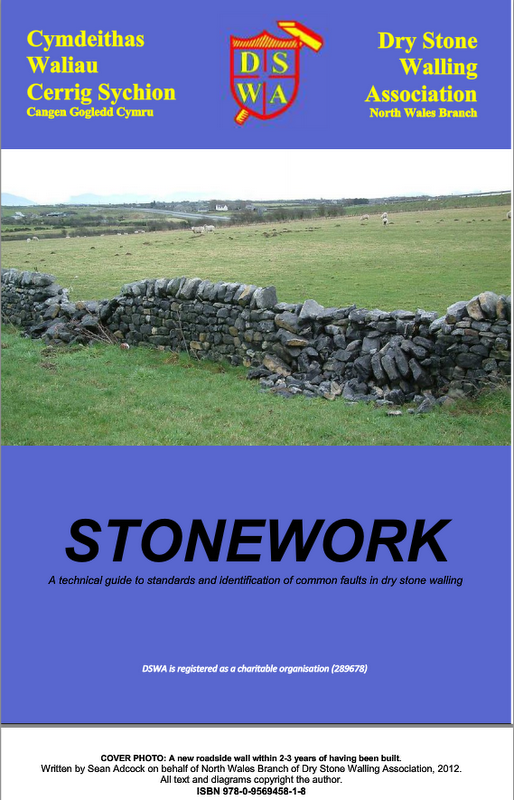 UPDATE 2/9/14
A month (8/2013) after stopping to talk to the home owner about this job I noticed work had started. I just could bring my self to photography the work while the fellow was working. They added a few more large rocks placing them length in which is correct. A few rocks will not make up for proper structural support. Other cosmetic issues I noticed, saw cut stones facing out, no sense to follow any string lines to help guide the built to be both level and have a correct batter. Click on the image to enlarge it to make your own judgement.
This new build was no better then the old build - worse. I'm always surprised that business offer services which they truly should not. This is like asking my lawyer to do my accounting. The property owner trusted a church friend to do this repair. But like the saying goes

"You Get What You Pay For."
In this photo above you can see the wall was rebuilt as it was in the first place - Single face (which is why it collapsed - what do I know? ) They added weed cloth to help separate the aggregate from the back of the wall. Now weed cloth is used for weeds.  If they felt it was necessary to reuse the stone they should have instead used geotextile as used when building inter-locking concrete block walls. The aggregate should have been removed completely - since it offers no needed drainage nor does it offer any structural support. So what does it do? WASTE valuable space which should just be dirt.

I informed the property owner that this repaired wall would not last since they did not change anything to correct the cause of failure - how the wall was built.

How long WILL this repair last?!