Mortar last for ever!? PART 2 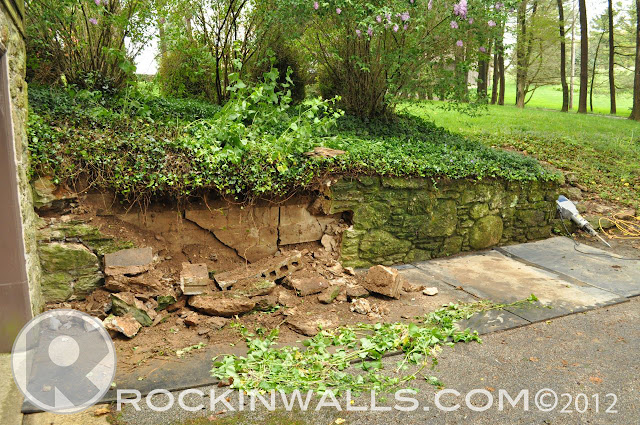 Demo old leaning wall.
This wall was built in 1969 with mortar and natural stone. The mason's did an amazing job with the design along with sealing the back cinder blocks with tar. They also took steps at the foundation to create a terracotta clay drainage pipe system. I would say this could be compared to todays plastic perforated drain pipes that many use. 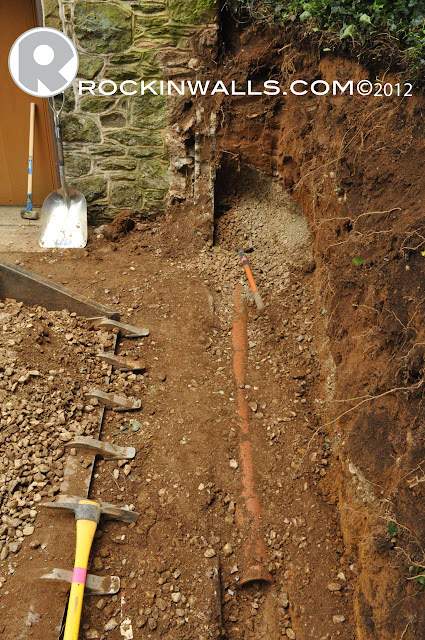 You can see in this photo the drain pipe which was placed at the bottom of the wall on the back side. They even used 3/8th's stone along with crush and run by the house. These pipes were in 1' sections - sitting one next to the other. At first when I hit these I thought to my self what is the brown stuff as I dug with my mini excavator. I got out then started hand digging with the pick axe. Boy o'boy what do we have here?. At first I was hoping to have hit a treasure. The client had told me that the government purchase Oxen for use in the civil war. Since the home was built in 1813. I was starting to get excited until I learned it was just clay pipe. 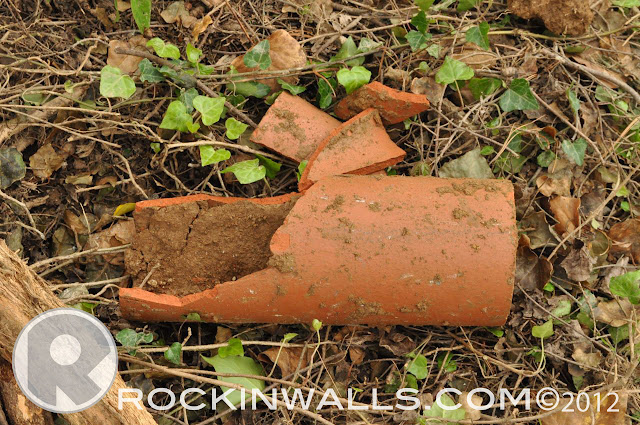 Non of the pipes were damaged unit I hit them with a machine or tryied to hand lift them out. The clay pipe had lost a bit of its stength over the years. I believe the biggest thing about finding these was I could never have planned it.  Come across something like this. Now had this been a grey water line (clean waste water from the sinks, tubes...) I would have had another issue on my hands with the rebuild. Since the wall was going to be laid dry I needed all the real-estate I could get for my foundation stones. I was happy when the client turned on a few sinks - nothing came out. Moral of this story- be sure to have a section in your contracts if your a builder about unexpected and un seen surprises under ground. Not only could you get stuck at a stand still you may need to replace something you  had no idea existed at your expense.  Surprise Surprise!! 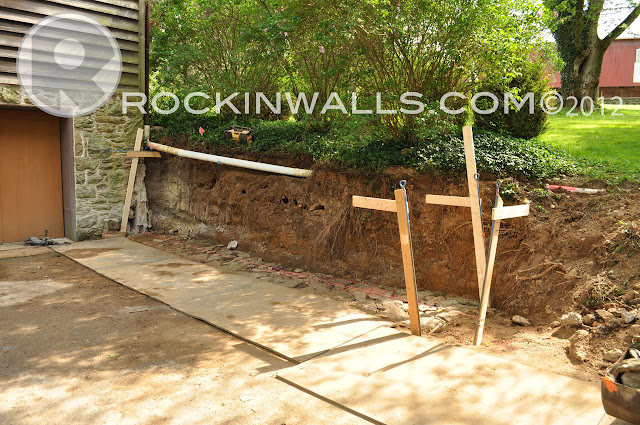 Moving on to why the wall may have failed. When digging this out with my mini I hit this sewage (rain ) pipe which was barred under ground. (Large long white pipe above) As you can see from the pictures that it comes from the house and goes out to the top left of the photo. Marker paint can be found on the pipe. Now of course since I busted the pipe I went ahead and replaced it. What I found I believe caused the wall to FAIL! The pipe had been put in backwards. 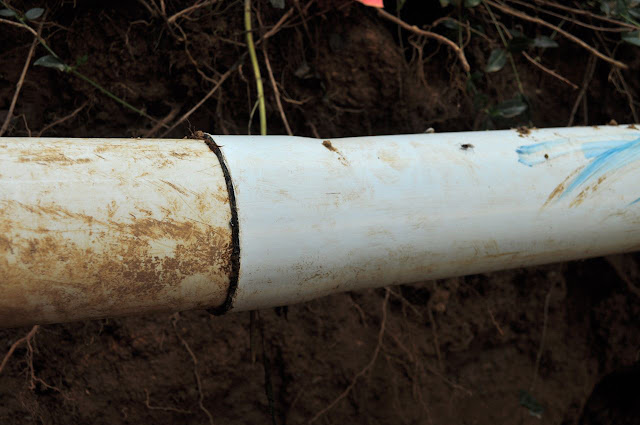 This section of new pipe is now fitted closest to the home. Notice how this section slides over top the old one. Now the pipe I busted this section was on the down hill side - I believe causing water to leak out over years and years. 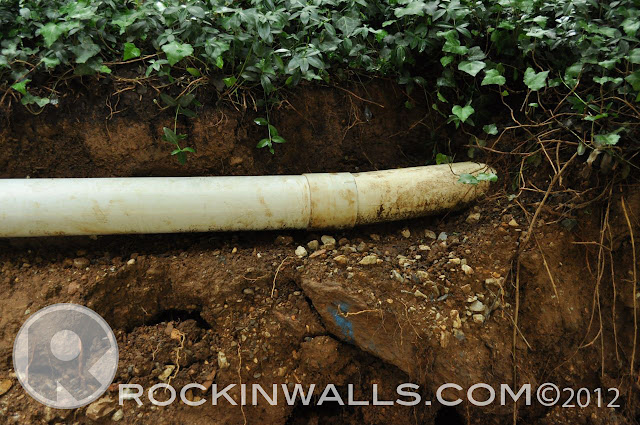 This is the down hill side which I used the old coupler from the up hill side now on the bottom side. This now creates a better seal. If a PVC style pipe was put in some one could drive over the earth minimal chance of causing the pipe to bust. Sewage style pipes work great for the price you pay. This area would never see a machine driving over it.

When you look at the old wall you can see the majority of the wall is falling over at the end for two reasons. One it has no support tying it back into the back. A corner could have really helped with strength. But more importantly had the contractor who put the pipe in with the flared end on the up hill side. I don't believe the wall would have failed. 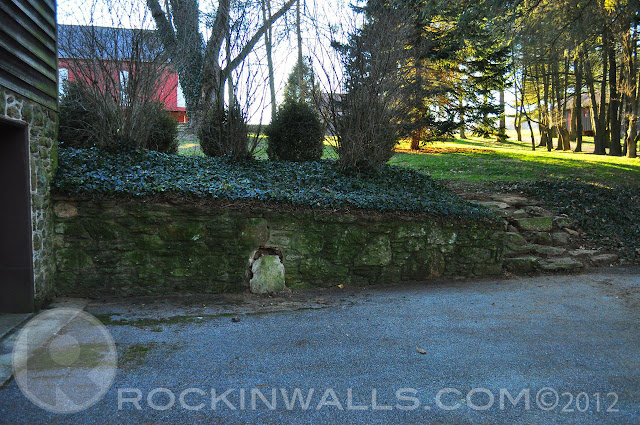 Keep in mind this is all just a theory. But when you think about the direction water flows, the fact that a pipe clearly should not have been installed in the direction it was. A wall of this size with stone and cinder blocks 19' long and 4' at house to 3' at corner Should NOT Looked Like This! 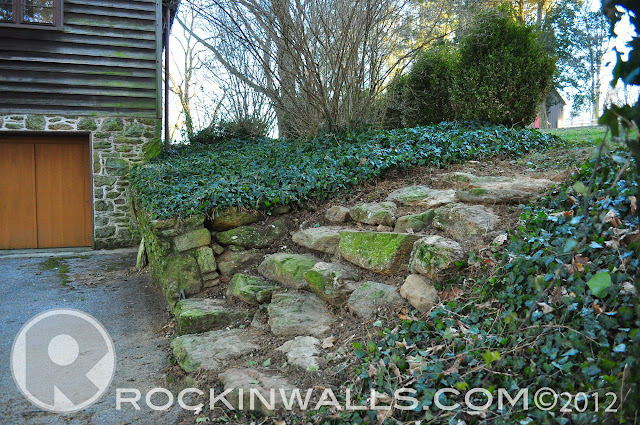 If you think of a dam it needs to hold water back. This wall should be doing just that with the dirt. Retaining wall! Now had the wall been designed with weep holes included it may be standing today. But since some contractor many many years later put at pipe in backwards Causing water to leak out into the soil- notice the middle of the all in the second photo up. With the crack in the wall and the stone on the ground. Now look again at the top 4th photo down with the full pipe. This was where the pipe was backwards. It could be something completely different. But I believe my theory is a good one. Now the wall has been built dry - the wall can now be a free draining system. No need to worry about this problem unless we get 1 week of solid rain then just about any thing would giveaway. You can't play with mother nature. You can only try to work with her.

Mortar last for ever!? With out hydraulic pressure

Notes: I'm not a trained plumber nor drainage expert. My opinion is only based on visual clues which lead to common sense. THE WALL IS LEANING OVER.....Water caused this action, which in turned causes a reaction - the wall to lean out away from the bank.